Label text and button caption not showing in some Macs

Hello. I checked forum topics but I could’nt find an answer to this issue. My compiled app works fine with Windows and some Macs, but on some Mac machines the label text is not shown, and buttons are shown but without caption. This happened on a new machine with M1 chip but also on an oldest machine running Catalina. Is there some way to fix it? Thanks, AG

Code? Screenshot? Xojo version? Are you able to reproduce the behaviour yourself? Intel or ARM?

@ Issue, you nearly never saw these too. And I think Robin have a hard time to understand most of the reported Issues… (often there is no context, no screen shot, no…); just read it !

Apologize for lacking details. I thought this could have been an already known issue.
Xojo version 2022.r2
There is no particular code to report, since the problem happens wherever a label or button is shown. They are not placed into any other control, just a window. I tried to toggle the “transparent” property, but this did’nt solve. And with the same code they are normally shown on Windows and on most Macs. The build setting is x86 64-bit but changing architecture was not a solution.
I can’t reproduce immediately the behaviour, nor always say which processor, since I can only test the program on other people’s machines. Thanks.

Because we only can “guess” what could be going on… are you using a particular font other than “system” as the caption for that labels / buttons? If yes… that could explain why they don’t appear on some Macs… because the lack of the required font installed in their machines.

But, as I said… is just a guess

Your guess makes really sense, but these control’s font is System 16 or 20. Moreover, it is the same font as some Textfields placed in the same window, and text in Textfields is always displayed correctly.

That is why a screen shot is useful. Simply Copy the image in the Clipboard and when wrinting your message here, press Cmd-V (Alt-V) to paste the image in this Forum entry.

Very simple to do.

Are you possibly using localised strings for the controls, that would happen to have empty values being used in the language systems you’re having troubles with?

I attach screenshots about the system information of one Mac where the problem occurred. Sorry they are in Italian but I think can be understood. 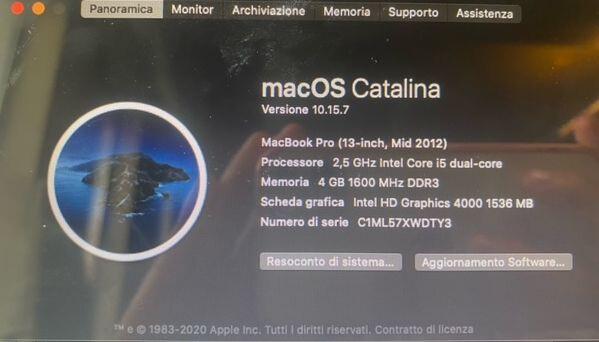 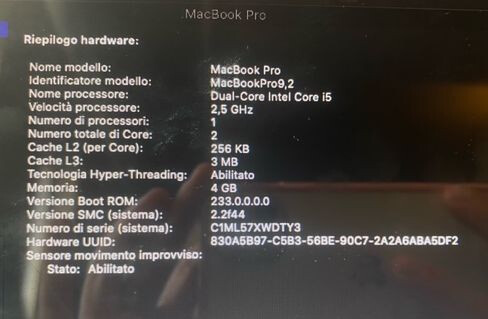 Upgrade your RAM !
This machine with Catalina and only 4Gb… It’s very slow and graphic performances can be affected (mostly if have an hard drive not a SSD).

Ok but I don’t understand why there is a difference between text fields (always ok) and labels/buttons, which should not require more sophisticated graphical resources

Do you have the same problem in light mode?

That is certainly not the cause of the issue. It may be good advice but isn’t relevant here.

I had the same problem with a user of my application in a company with this type of material. Switching to 8Gb of the machine solved the problem. Xojo was not involved.

The problem is not related to the amount of memory installed. It occurs also on a MacBook with 16 G as you can see in the attached pictures. And, on the other hand, it is not clear how showing text inside a label could require so many resources. 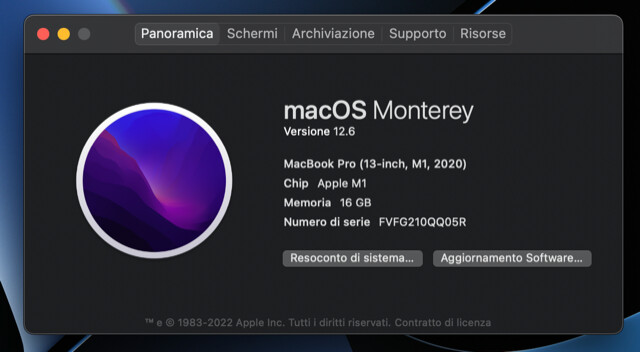 Could you show us what exactly happen (photo of the problem)

And what about my previous reply?

Sorry, I was trying to test your suggestion. But I am not sure having understood it properly. Can you please explain it further? Thank you

the problem happens wherever a label or button is shown.

Set the text of one button, one label, and one text box on a simple window to have the same text.
(Use text or a string constant which you have seen fail)

Run the app, take a screenshot of the result and post it here.
Also, if you set the text in code, please tell us what code you use to do it.
Then at least we will know what is being done and seen.

Did you remove the memory to see if the problem came back?