So whenever you finish your week 14 project, go ahead and post it here. Have fun and be sure to download other projects and discuss!

I finish the challenge with ShowKeys. This is not a virtual keyboard, but the opposite: a tool that shows you the physical keys you type. I will use it as part of my training sessions (on projector). ShowKeys is more than one hundred of controls, with a source code quite important. In order to limit the use of display operations (a bit slow on Windows with Xojo), a rather complex mechanism limits redraws. The CPU load imposed by the final version of the application remains moderate.

And as a gift, to celebrate the end of the contest (and to complete the goal of 14 applications, even if this one did not arrive in time), here is SplashScreen, a template that can display a splash screen with a minimum of code. Just copy the SplashScreen window into your application and you’re done! SplashScreen uses a suite of timers to gives you precise timings and a cool fade out effect.

I want to thank Xojo for this initiative. The opportunity for me to get back to code, and to create some tools that could become commercial solutions in the future. Thank you Xojo and thank you Paul!

Have been struggling both with a pneumonia (so no 10 projects for me) and with the htmlviewer for Xojo. The latter at least I seem to have conquered a little by now, but creating apps that need a viewer for both OSX and Windows is a lot harder than I thought. Most functions and solutions did not work with Webkit… I think that might count as a bug even.

In the end I build a simple browser tool that detects if there is a doi (digital object identifier) mentioned on the page, which can then be copied to the clipboard. For text searching and getting the contents from Webkit, I needed to fall back upon the MBS plugins. I hoped to be able to do it without plugins, but alas Xojo let me down majorly on Webkit-integration

My project for the final week of the Just Code Challenge is a Marching Band ScoreKeeper iOS app, which I made to track the score of my son’s marching band shows.

I often like to sketch things out on paper before starting and here’s an initial sketch of this project: 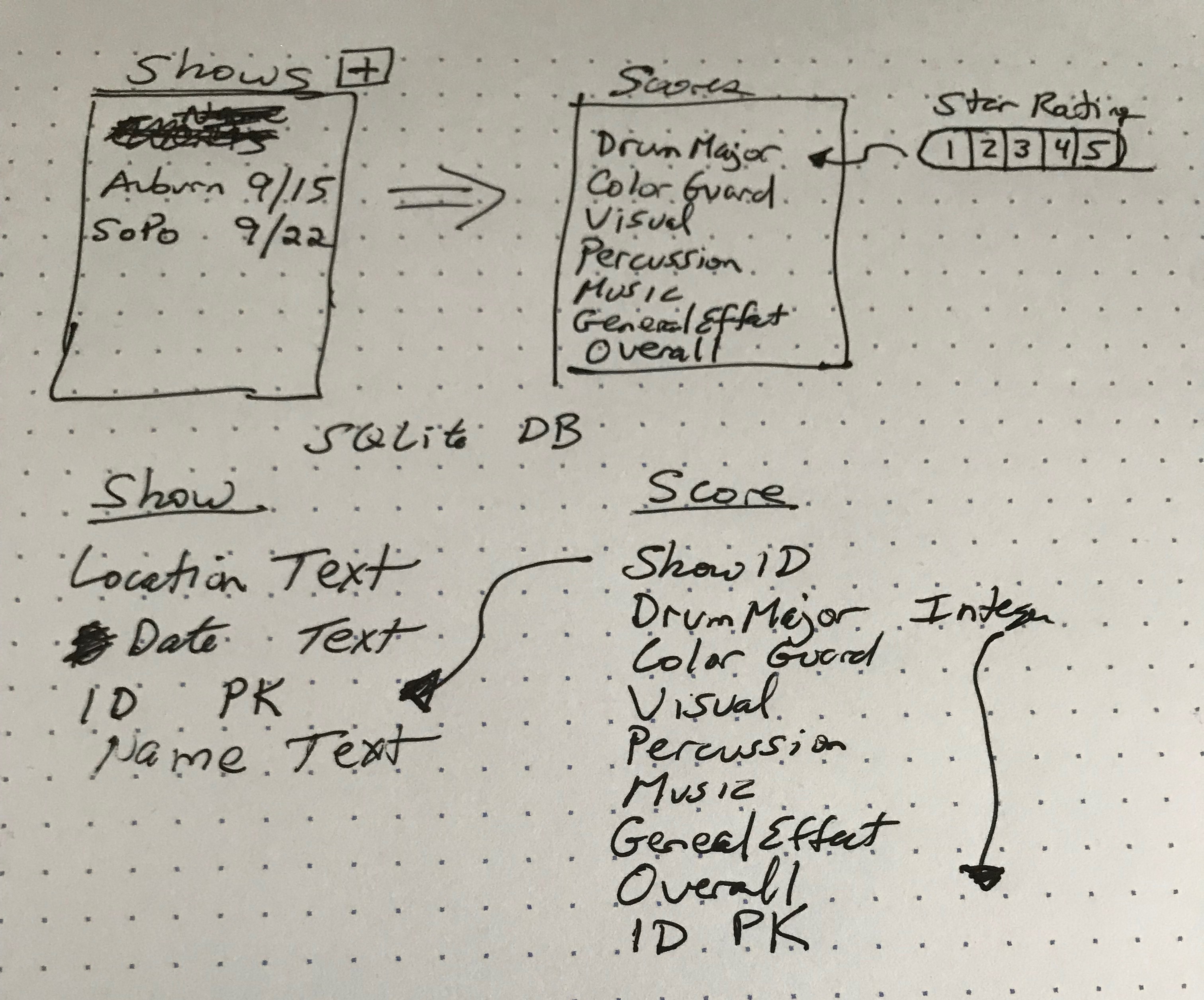 I often like to sketch things out on paper before starting and here’s an initial sketch of this project:

You are not alone, I too do that, usually for not forgetting an idea

@David Feugey - I would really appreciate as US-mode switch.
Funny project to keep, it shows how to detect keys and key-combinations using the windows declare…

That’s the nice part about having the source code, there is nothing stopping you from doing this yourself.

This week I created a small .INI file reader with just a few lines of code. This works on all platforms.

An .INI file is mostly used by Windows programs and looks like this:

A value from the .INI can then be queried as follows:

The source code with example

This week I created a simple animation ot the bubble sort algorithm. More information at https://en.wikipedia.org/wiki/Bubble_sort.

My submission for last week made use of my expression evaluator class. It evaluates user entered mathematical expressions using double precision math. I’ve also created a version that works with Bob Delaney’s BigFloat plug-in for extended precision. It’s almost a drop-in replacement for the original expression evaluator. So, I decided to come up with a project that would make use of user entered expressions in extended precision math. Against my better judgement, I decided to try writing a spreadsheet program. How hard could it possibly be to write a spreadsheet program in a week? Yeah right. Not surprisingly, this thing is a bit rough around the edges, and there are some bugs (refer to the notes in the download file), but it does basically work.

Other than the precision, the differences between the regular and the BigFloat versions are fairly minor.

Due to time constraints, I haven’t been able to test this thoroughly, and haven’t had a chance to test it on anything newer than XOJO 2016r3 on a Mac which is my normal development configuration. If you have problems, please let me know.

The project file is here: BigFloat Spreadsheet Project
Please refer to the notes file that’s included with the project.

Yep, I need to find an US keyboard, but it’s basically possible

@Alberto and @Tim: Thanks!