I have nothing at all in build - no copyfiles for example.
The sign area says this, and can not be changed:

I’ve tried a few variations on this , added as a script between ‘Build’ and ‘Sign’, but no difference

(We’ve moved on a bit, but I cant change the post title, and it feels a little late to split into a new post… apologies)

I can confirm that this signing error occurs during/after build, but before any script step.
I cant get in there between app creation and signing.

If I put the script before build, there is no app to affect.

You should be able to put your xattr script between the Build and the Sign step. 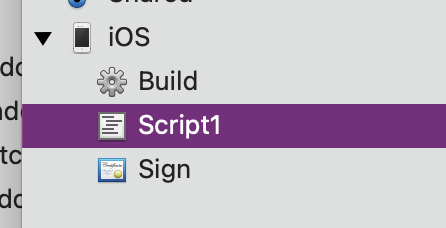 Agreed… thats where I expected it to go, but that’s too late.
The signing happens before the script runs, leading to:

And obviously, when I tried it before the build stage, there is no compiled app to set attributes upon.

I should add again that Xojo 2021 R1 compiles and installs with no problem.
I’m confused about what the later versions are doing differently, since this appears not to be needed?
Is it down to the SDK version they use?

The only changes that I know of which would have affected both running and building would have been the SDK change, but I also cannot think of how that would have caused this error.

For anyone that’s following this thread, I took a look at Jeff’s project this morning and (on my machine at least) a good number of the support files were quarantined. We solved this by running:

and the project runs in the simulator again.

And having applied this as a (one-time) change to the text files I had included in the project, I am debugging once more.
Greg is a hero.

Why a bunch of text files would be ‘quarantined’ is beyond me, but …onwards…