Whatever I do, the system is behaving as Implicit Instance = True for all windows all the time.

Is this API1 or 2? Window or DesktopWindow?

Then any window you have:

in newer xojo it is here 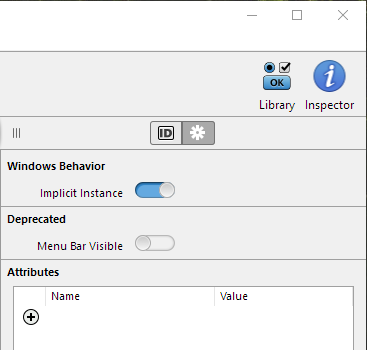 Docs says, change it in the Inspector Behavior, and It’s there as True, and I changed to False

So now we have 2 different properties for the same thing and one is just a garbage floating around? 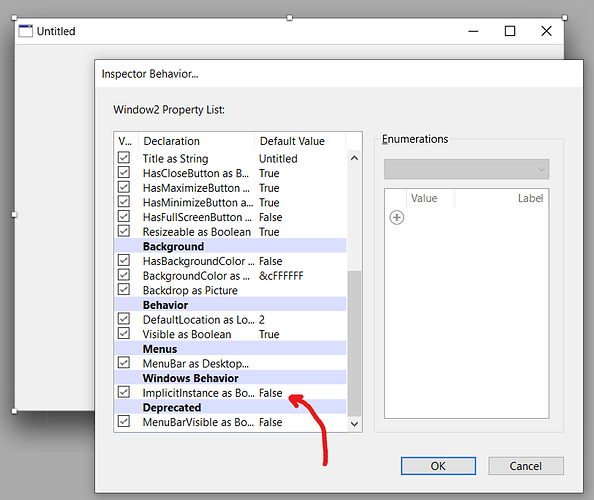 i used this Inspector Behavior window only for custom container controls.
i see this only as template.
in my case i made own properties visible for the inspector panel.

I always considered it the expandable list of the properties of a control class, their default values, and their visibly in the property panel to change the values of one already placed in a layout. There’s a place for confusion here needing clarification in the docs, with special emphasis for Implicit Instance default, that vanished from where it used to be.

Thanks for showing where its default value is now.

Well it should certainly not say “Windows Behavior”, because that implies something to do with Microsoft Windows OS. It should be “Window Behavior” as it has been in the past.

The Inspector Behavior dialog is for setting the defaults for controls that are placed on views and need to be changed before the instance is actually created in the IDE. It does nothing for instances that already exist.

As the Implicit Instance property vanished from the property panel (at least from where it used to be) I searched the docs and read its now on the Inspector (no images to help) and changed there. Made sense, only that place had a default value for the property.

It does nothing for instances that already exist.

Sure. But a Window was just designed, not instantiated, so it did not exist, just its Class definition, and that was the idea. It would exist after a