I have another EnableMenuItems Not Firing problem

I am using RecentItems menu from “Designing a Recent Items Submenu” By Charles Yeomans
This has a class to manage the RecentItems, and its own EnableMenuItems, which works fine in a version of my app from two months ago. RecentItems is an instance of App.

In my current version, the RecentItems EnableMenuItems event doesn’t fire. It should fire before the window’s own EnableMenuItems. The only thing I did that I can find is move the instantiation from App.Open to where the limit for the amount in the sub list is read in. I also moved the limit property outside of the class. So maybe I did something else.

Suggestions?
This is my version of the above project.
https://www.dropbox.com/s/o6xr9tyhqvdq4pd/RecentItemsProject.xojo_xml_project?dl=0

Do you have the problem on macOS, Windows, Linux? What version of Xojo are you using?

Running your sample project on macOS, using latest Xojo release, seems to work fine to me.

If you want to try another approach to a “Recent Items” menu, you may be interested on this post 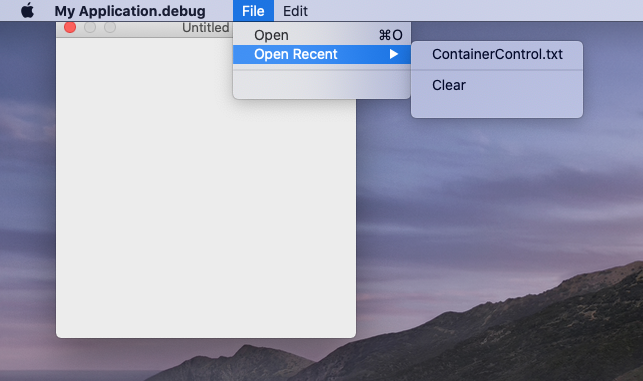 I am using Mac (Mojave) and Windows (Current Version) and XOJO current.
This does not work older version than 2020 r2.
I have trimmed my project down to a minimal amount that will not screw things up. There are two remaining windows: StartUpPrefs and MainPage. RecentOpen doesn’t work.
There are two folders: ReviewCards and Korean Class. Korean Class has files that can be read by my app. ReviewCards has the file ReviewCards Recent has a binary

The instructions are included for StartUpPrefs in the HelpFiles, but quite simply type anything in the cell, hit enter, save it, close the window out, and the main page shows. If you open any file in Korean Class, it will show in the table, but it hasn’t shown in the File Open Recent menu.