I am writing a simple game where the controls require the ability to turn left and right (360deg)… move forward and backward, and “fire” a weapon… so basicly 5 actions. I have two methods in mind, but not sure which way to go.

If it’s an movement intensive game players prefer movement control on the left and action buttons on the right, like a NES controller.

the “actor” will be moving more often than not (standing still is “dangerous”)…
right now I’m actually thinking of “option 3”
having 5 buttons arranged on the screen… 4 in a diamond like arrangement… Fwd/Back Left/Right where the button is held down …
and a single “fire” button on the other side. The “actor” won’t be rotating and moving at the same time…I guess it could, but usually you’d rotate, then move

The usual and common setup here is to have two “joysticks” (not tapped but dragged) relative to where you place your thumbs. Wherever you place them becomes “center” and sliding to the sides moves the “joystick” in that direction.

For what you want to do, I’d say the typical would be “point of view” on one side (left, usually) and movement (strafe left/right and forward/back) on the other.

Since looking at controls is a no-go in action games, they usually have auto-fire. But in your case you may not need up-down on the left, so you can set up to fire without losing the left-right POV on the same control (and it would be pretty intuitive). You could even use “down” on the left side for an alternate action/fire. 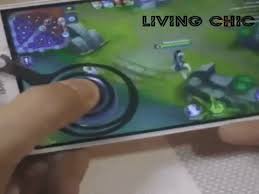 Hi Eduardo, Love to play with that, do you have a sample code? Cheers
Martin