Filtering results in a ListBox

Hello, I have a ListBox filled with names stored in an SQLite DB. If I digit the full name I’m able to filter it and see only the result, I’m wondering how to search by using a partial word (i.e. just 3 or 4 letters of the name). I read about MATCH and LIKE but could not apply them to my app.

What have you tried to do? MATCH is easy to use.

You create a virtual table first (SQLite FTS5 Extension). Then you use a MATCH:

Here’s the link to the file and the DB: Smash
Sorry it is in Italian but I followed your indication in using German towns.
I’m only interested in searching the right ListBox which, eventually, should be filled with names and ids (i.e. D1, D2,).
Thanks for any heòp

In fact they are both; some are French (around Strasbourg) and some are German…

Google Maps opens displaying Strasbourg… (where I am).

I will look and report what I found later today.

Did you try with the virtual table? There is nothing really complicated to using MATCH.

a. two images are missing; we do not care, compile in the IDE…

b. The TABLE named “bonif” is empty:
I get Nil in the second line below:

Yes, I moved the sqlite file to Documents (in the right nested folders found in App.Opening).

I found the TABLE with the names of the cities (pers).

I have to go; I will come back later, sorry.

Yes, I do not care about the table named bonif (I won’t search it).
Images are compiled in the IDE.
Thank you, anyway, for your help

Yes, I am trying it and I also went along with the example in the help.
Doing exactly what the help says (changing names of the DB and tables, though) I get an error which I show in the picture.
Either I’m doing something wrong (most likely) or there is a glitch in the help 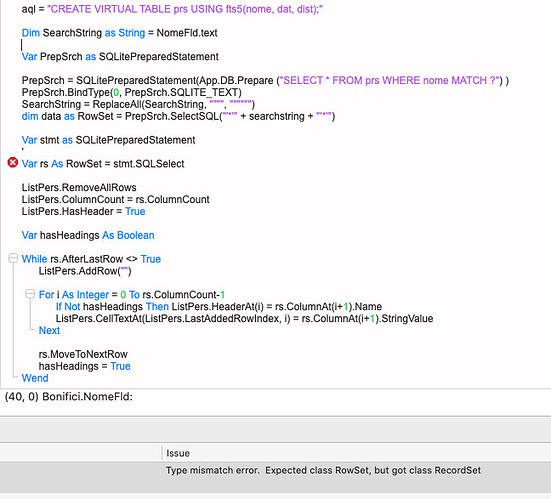 Sorry I’m late.
I made it. Thanks a lot