If you’d like to see the eclipse, you should go outside and stare intently at the sun for hours…

Ok, that was a joke, don’t do that, even with sunglasses. You can use special eclipse glasses, a welder’s mask of shade 12 or better (13 is recommended, 14 is better), or use this:

WOW! talk about UNDERWELMING.
Now I live in San Diego, and we were supposed to experience a 58% peak at 10:23 am… uh… I percieved NO change in the amount of daylight… and a pin-hole projector revealed nothing (assuming I made the thing correctly)

Same here in Montreal. We are in the 58% range also (on the other side of the shade), and I share your sentiments even if the maximum coverage is still to come in a little over 1 hour. Right now, we can only detect a slight drop in luminosity if we really pay attention. It is said that one readily perceives the change in luminosity when the coverage reaches around 80%.

Those within the total shade corridor will certainly have a different opinion. Flowers closing, street lights coming on, etc. For them, it will be an interesting experience.

I think you need to be close to 100% to see much darkening.

Now, if you’re just outside the path, like maybe less than 30 miles or so, then you will experience “deep” partiality. The Moon will still track off-center, but at the time of maximum coverage, lots of the Sun will end up being covered by it. Now, it’s still not safe to look at without filters (!), but the deeper the partiality you get, the more of the “eclipse” effects you’ll get to see. By that, we mean that you’ll see (through your eclipse glasses, of course) a very thin sliver of the sun - the closer you are to the path, the thinner the sliver you’ll see. You’ll also get to see the sky darken a bit, and if you’re really close to the path, the overall eerieness of the quality of the light around you will deepen, and you’ll get that weird feeling that the light isn’t right, and that something very strange is going on around you. But, that’s it. That’s all you’ll get, and like your friends who are still well outside the path, you’ll also come away feeling like you got robbed.

Guess it takes special equipement… A friend of a friend who lives about 10 miles away sent me a pic of the eclipse thru a a solar telecope…
I tried the pinhole thing, but saw nothing but a bright dot… must have done it wrong

What I cannot believe is San Diego Gas and Electric posted huge warnings, that we would have a power deficit of 500 megawatts during the entire two hour period… Seriously? How do they cope with the TOTAL darkness that occurs every night…

during the day the demand is a ton higher

I remember making a shoebox viewer with my father. i was probably something like 8. We experimented with several shoeboxes (my father was a science teacher…) For best results, the pinhole must be very small. A small caliber needle size, for example. A second hole for your eye. The best picture will be dim. The larger the pinhole, the brighter the image, but the lesser resolution.

There will be another one in 2024. The path will be from south-west USA going north-eastwardly. A zone in New Mexico will be in the total eclipse path, so will be Montreal.

The point being SDG&E inferred that the solar input would drop so much that production (via solar) would reduce output by 500 megawatts… Maybe if we were 100% total for 2 hours… but … the solar output here was insignificant, less than 20% of the the power generated by SDG&E is from solar…

The eclipse was at about 80% in Calgary. The pin-hole viewer worked well and it became only slightly less-bright.

Sadly, it was overcast here in San Francisco. Ordinarily I love this kind of weather, but not today…

We had just over 80% here in southern Michigan… it was cloudy but broke up enough to get some good views… Now we have a thunderstorm rolling in… luckily after the show was mostly over.

I wonder what the “flat earthers” think about this?

I wonder what the “flat earthers” think about this?

What? do you mean the Eath is not flat? Ha! next, you’ll try to have me believe that it is not in the center of the Universe, too?

In the Netherlands, I saw the sun set as a big orange ball.
I’m so jealous of those who watched it with their own eyes.

For those in Europe, who is in for a trip to the Pyrenees, in 2026… I was about to book my flight. But unfortunately, Transavia won’t let me.

What? do you mean the Eath is not flat? Ha! next, you’ll try to have me believe that it is not in the center of the Universe, too?

As a video guy, I have been wanting to make a nice documentary about this Flat Earth discussion. I want to film several experiments that could be done with stuff you can find in your house, thus no high tech stuff.
And also, maybe some sort of time-lapse, of a GoPro that will be turned on at the equator. And filming two people. One going to the Antarctic and one going to the North Pole. And just filming the differences.
(On a flat earth a 24hr sun is not possible)

And here’s your photo of Trump looking straight at the eclipse. 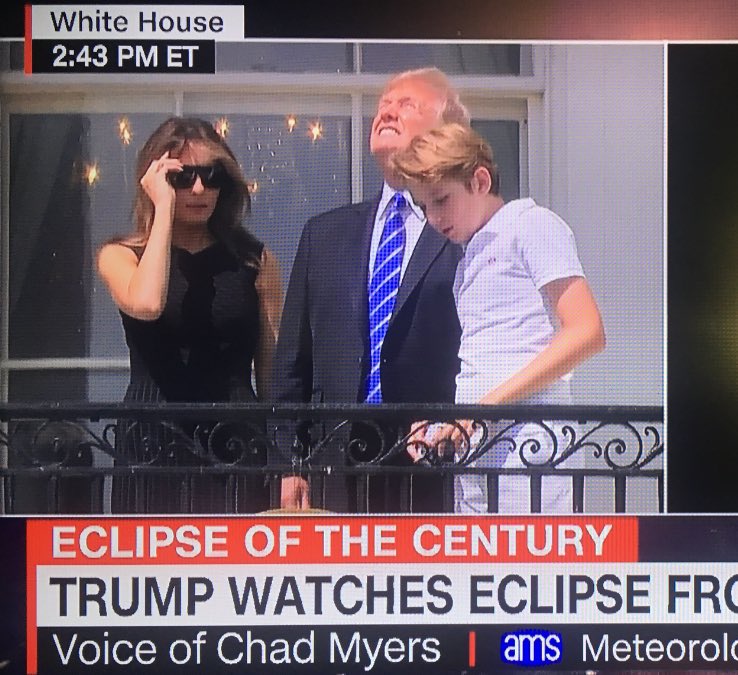