Im eyeing replacing my aging monitor and there are several nice curved models out there at very reasonable costs. Ive never even sat in front of a curved monitor though and Im worried that its more for gaming or movie watching than reading a lot of code which is what I do all day.

Do any of you use a curved monitor? Do you like it or is this a really bad idea?

I’ve got a 34" dell. It is slightly curved. It is really nice when viewing tables or spreadsheets as you can see lots of columns. It is also nice for coding since you have tons of real estate to move things around. In my experience, the productivity gain from a monitor like this is similar to going from a single monitor to dual monitors. But if you already have dual monitors, and they are pretty large (like 24" or so), then going to a 34" single monitor is just “different” not necessarily “better”.

If you purchase a really wide monitor then the curve is nice as it lets you see the far edges better than a flat screen. It is not necessary to be curved on something like a 24". There is software that allows you to simulate multiple monitors within the single monitor. This allows you to maximize a window and it does not take up the whole screen. I did not end up using it and I just manually size windows according to my needs at the time.

Ironically, I still find myself wanting a second monitor as I got really spoiled over the years by having a monitor dedicated to Microsoft Outlook.

I had a 27" curved monitor (1080p) at work for a while. At first it was interesting to have the curved view, but eventually I stopped noticing it (maybe the width wasn’t wide enough to get the full benefit?). The part that bothered me most was that it just wasn’t bright enough in a well-lit room, so things seemed faded.

I don’t know if it’s a gaming thing, that these curved monitors are deliberately less bright (for dark rooms) or it was just that particular brand (MSI), which I had never used before.

I eventually gave up the monitor and just use the laptop screen. When I’m at home I absolutely love my 27" 4K monitor (Dell), which works very well with my MBP and Windows machines.

Upgrading to 4K was a much more significant change than the curved screen, to me anyway.

So, before purchasing, make sure to do some homework on things like the brightness levels or whether your computer will support 4K (if going in that direction).

I hope that helps.

I have a 24" 1080p curved monitor on my PC. It’s nothing special. The curve makes the monitor take up more space than a flat one, and I don’t notice any effective difference between it and a flat monitor. I got it simply because it was a cost effective 144Hz monitor.

I personally see no value in curved screens.

EDIT : would I go out of my way to buy one for myself ? no
I’d just buy a big flat screen with decent refresh rate and high rez

How do mhz affect the eyes?

Even the difference between 60 and 120 can be hard to notice. Cursor and window movements will feel smoother, but that’s the most noticeable. However if you play a game at 120, record at 60, and play it back… the difference is very noticeable.

I have an HP 34" curved monitor that’s 3 or years old. Really like it. I prefer that to having one big monitor over having 2 or 3 smaller ones.

I bought second-hand a 34in LG widescreen with 1440p not curved and while I love it I can see that a curved one could improve the experience.

I bought second-hand a 34in LG widescreen with 1440p not curved and while I love it I can see that a curved one could improve the experience.[/quote]
View of what? It looks flat while in use.

I have a 49 LG 4K monitor and if youre the type that likes the split view its not bad for coding as there is a lot of real estate. The biggest issue is having to move your head to see from one side to the other unless you sit 3-4 feet away. It is great for movies and games that support the 16:9 and 32:9 resolutions but it is kind of awkward for centering apps that were made for smaller monitors. Honestly, for coding I wouldnt go with anything bigger than 32 if youre looking for curved screen and, although Im sure some would disagree with me, I fell that 1080p is the best resolution for Visual Studio and Xojo and such since the higher resolutions give me eye strain, the benefits of getting old.

I have considered a large, curved monitor, but neck strain and lost cursors is a real thing.

I have three monitors (iMac Pro plus two external: one external wouldn’t awake after returning from a 6 week holiday, but resurrected the day a replacement was delivered!) and have my apps usually full screen on each. This allows my brain to focus on one thing, in one place, at one time (eg email, Xojo, Skype, running Xojo app, etc). Multiple monitors also allows me to see what my app looks like on both a Retina and non-Retina screen without any monitor reconfiguration.
Multiple monitors (vs large curved) allows me to focus on one or two at a time, meaning less neck strain. It also means I have a better idea on where my cursor is likely to be.

I get the impression many users are equating curved monitors and ultra wide monitors. Theyre not exclusive. You can get regular 16:9 monitors with a curve, like the one I have, which have absolutely no advantage over a flat one. Ultrawide monitors are usually always curved because theyre usually trying to act as two monitors, and most people would angle each monitor slightly towards them. So the curve helps to feel similar.

I have considered a large, curved monitor, but neck strain and lost cursors is a real thing.

And too much information displayed for my brain to track.

Maybe it’s an age thing, but I found eventually that having just one “medium” size screen in front of me far easier to concentrate with, without the neck pain of constantly swiveling back-and-forth.

Now, with my one 27" 4K monitor, which I run at 200% scaling to emulate a 1980x1080 area (giving me 4 pixels for each “standard” pixel), the resolution qualify is a treat to my aging eyes and my brain isn’t over exposed to too many open windows at once.

It feels like I’m being more productive again, but maybe that’s just my imagination

I currently have a dell 34" monitor that is slightly curved… and I love it. It is wide enough I can easily have 3 applications running side by side pretty comfortably. For example, here’s a picture of my desk this morning: Laptop sits on the left of the monitor, and functions as mostly just a place for Slack and Messages. On my main monitor I have this browser window on the left, Discord in the middle, mail on the right. 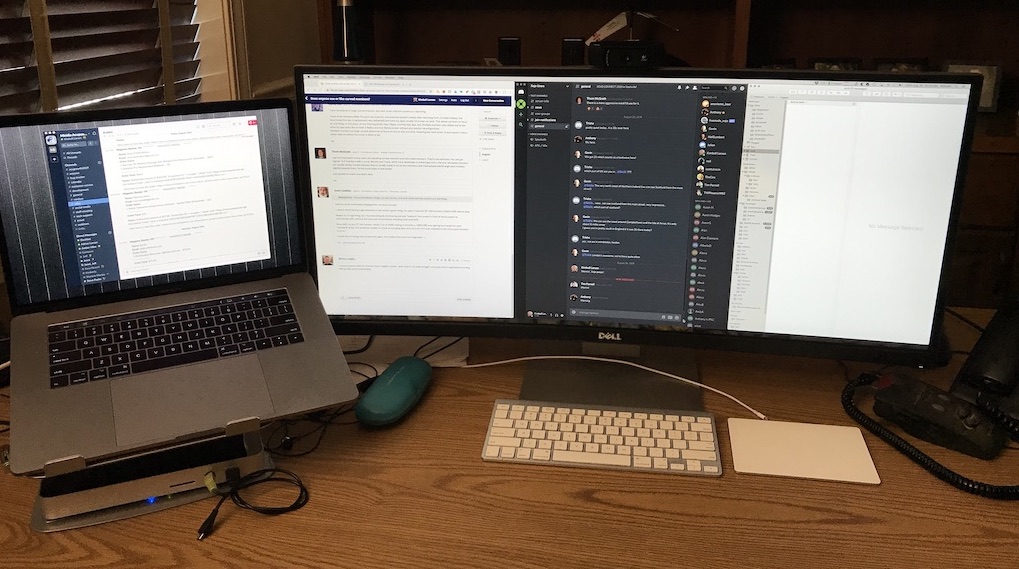 Having this much real estate (especially when coding) is hugely helpful - moreso in Xcode than in Xojo, but I’m a fan of large monitors. Once they get over about 30", having a slight curve helps with the viewing angle / perspective.