I assume that is a bug in MacOS rather than in Xojo although I do not remember it happening in older versions. If I do a search on some string (In the example below .FillColor =) I get the locations of all the matches. If I click on one of the matches, and then scroll on the code window a little bit and then click on the same match intending to go back to the matched line again, I get a curious little ghost over the code area. Note the second line 16 which is sitting over where line 22 should be. Click ANYWHERE and the situation corrects itself.

What amused me enough to write this note is that the ghost does not appear when you do a screenshot. The screenshot shows no anomaly. That is why I had to use my iPhone to take the image below. 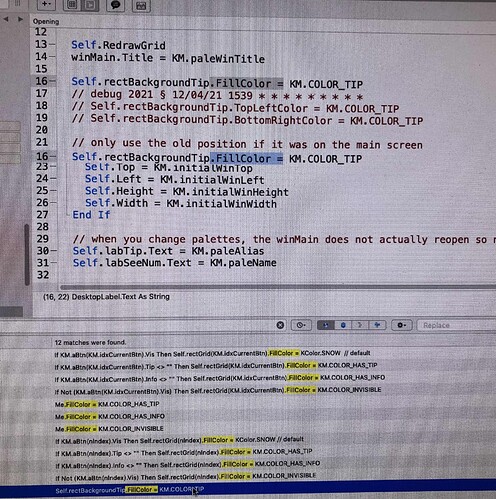 I remember there was a bug in the IDE regarding numbering the lines but don’t remember the specifics.

Out of curiosity, why don’t you use screen captures ?

Out of curiosity, why don’t you use screen captures ?

the ghost does not appear when you do a screenshot. The screenshot shows no anomaly. That is why I had to use my iPhone to take the image below.

What amused me enough to write this note is that the ghost does not appear when you do a screenshot. The screenshot shows no anomaly. That is why I had to use my iPhone to take the image below.

Ooh, that sounds like a GPU / driver bug. What model mac are you using? If it turns out it’s a mac with an Intel integrated GPU I get bonus points.

I read too fast

. That means the screen buffer and the display differs. WYSINWYSG (what you see is not what you should get).

A driver bug on a Mac, really

I read too fast

No worries. I made such mistakes more than once in my life too.

Maybe the action to screen capture refreshes the IDE, can you video record the screen and see if you can capture the ‘ghost’?

I am doing the screen capture with the built in Shift-Command-3. Obviously I am hitting the keyboard when I issue that command but visually the screen does not change. It is only when I click into some other window or the same window that the ghost disappears.

is this ghost always at a code folding start?

No. It is just at the position that that line of code would be if you had not scrolled the code window a little bit. If it had not been scrolled between two invocations of clicking on the line in the Find area you would not see anything amiss.

To reproduce in my configuration you click on a line in the Find area, in my example line 16. That line becomes slightly highlighted. Then scroll a little bit. Now click for the second time in the Find area on the same line. That slightly highlighted line is reproduced in the physical location where it originally was. But since you scrolled it a little bit in the interim, it lands in the “wrong” location overlying and obscuring some other line of the code.

So it can sometimes be seen not directly overlying another line as in the example below. The ghost (in this case line 33) is just being shown over its former physical location, say 4 inches from the top of the window. That happens to be between line 40 and 41 in this example.

That happens to me also, on big sur.

I’ve seen it on Catalina as well, I find just clicking on another method then back again clears it, or sometimes waiting a few seconds. I have a decent graphics card in my iMac as well…