Copy the contents of 'builds' folder

I have a IDE script that creates two compiled versions of my app. I want to move them (alongside resources and libs) to another folder… I tried runing an xcopy command with DoShellCommand but I can not set the source folder (/My/Project/Folder/Builds - MyAppName/Windows) for the copy.

The AppPath variable (AppPath = BuildApp(3,False) points to the Exe and NOT to the whole folder I want to copy (incuding resources and libs)…

or just chop off the displayname

It’s a Build step I am trying to setup here

Have a look at the available Building Commands.
It seems that you’re looking for: CurrentBuildLocation As String

Returns the shell path to the app that was built. This can only be used in a Build Automation IDE Script that runs after the Build Step.

I am writing my IDE script in the IDE script editor (or however it’s called). If i try to run the script I get an error in the line I called “CurrentbuildLocation”…

It’s a Build step I am trying to setup here

Because of this I assumed:

If you now Build your App (either by pressing the Build-Button; or by using your IDE-Script calling: AppPath = BuildApp(3,False)), then right after the App has been built, the “Post Build Script” (and whatever Build-Steps you have after the “Gear Icon”) will run (in the order of their placement).
And that Script is aware of the “CurrentbuildLocation”.

One example is this “Post Build Script” which signs the App and creates a DMG (when building on macOS).

A bit above on what’s visible in this ScreenShot the “CurrentBuildLocation” is being used: 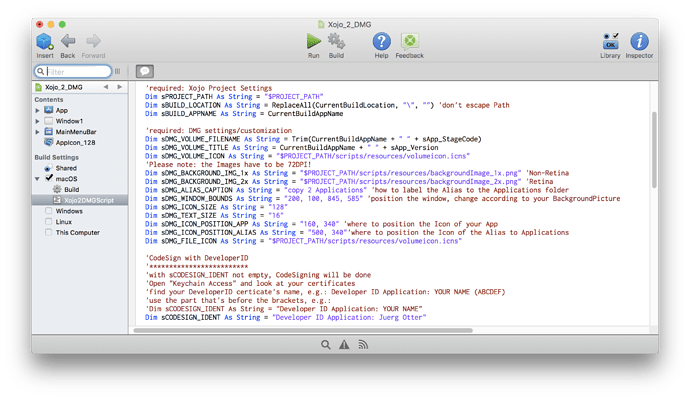 But I don’t have an answer for an IDE Script, which you seem to be using. The simplest solution is probably what @Dave S has already suggested: You know “path + appname”, so simply remove the trailing “appname” from your String.

I am probably missing something here because you guys are suggesting solutions that are not IDE scripting compatible.

I finally found it…

Thanks a lot for your help !!