For as long as I know, it was a well known fact that Mac and Windows handled double clicks differently: Mac would trigger double clicks on mouse up and Windows on mouse down (earlier). Those are “little” differences that make me remembering why I prefer Macs

I wouldn’t try to assume your case is different.

If the MouseDown returns False AND the second mouse release returns within the necessary area and timing you will also get the DoubleClick. This can be seen if you do a quick MouseClick-Release-MouseClick and not doing the second release of the mouse button for a few seconds. On Windows (at least) the DoubleClick won’t fire.

Basically it is what I said … .CellClick is always triggered in mouse down (which is not correct behaviour imo).

1: was there a CellClik in Xojo (Real Studio or REALbasic) ?

2: MouseDown with MouseUp lets you “regret” to click there (if you release - MouseUp - out of the Control aera). CellClick will not. 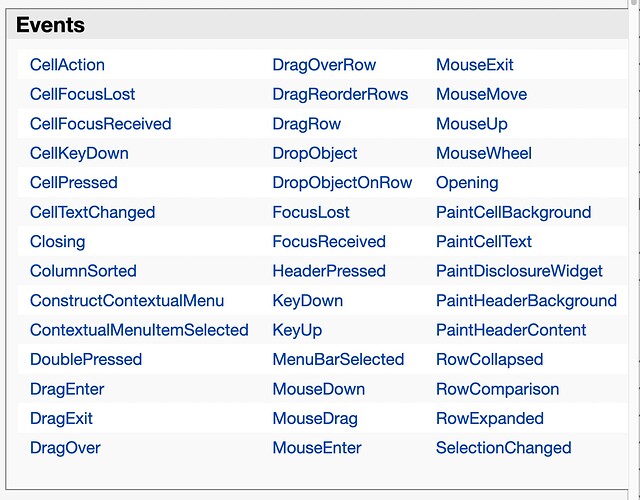 1: was there a CellClik in Xojo (Real Studio or REALbasic) ?

For the new API2 it is CellPressed. But the issue is the same.

With the events that exist (cellpressed, mousedown, mouseup, mouse enter, mouseexit) you can implement any behaviour you wish.

In my case, my buttons when clicked (pressed) become darker. However they don’t do any action until you release the mouse. Or if as @Emile_Schwarz says you “regret” it, you can move the mouse outside the button and it becomes light again. Release the mouse at this point and nothing happens.

Well, how can I get an event triggered, only on mouse up after I click on a cell?

My buttons are instances of a DesktopContainer.

resetState() is a container method:

mouseisDown is a container property. The paint event uses it to decide what colour to paint the button background.

Yes obviously, but that does not return the ROW value (which it does in CellClicked event and which I need).

And for what worth: Using .rowFromXY(x,y) in the mouse down event is not reliable.

So in CellPressed you store row and column and Return False.

I think I tried this in the past and didn’t work. But will try again.