Can I draw a MouseCursor into a Canvas?

Is it possible to draw a MouseCursor into a Canvas ?

Nota: no, I do not want to change my Mouse Cursor…

The error I get from the above code is:
Type mismatch error. Expected class Picture, but got class MouseCursor
'cCurseur.Backdrop = System.Cursors.MagnifyLarger

and I do understand. But, a MouseCursor is an image (yes, it probably holds an image and a hot spot -x,y-).

seems only oneway into constructor.

Is it possible to draw a MouseCursor into a Canvas ?

As far as I know it is not possible to convert System.Cursors.xxxxx to a picture.

And some of them can be downloaded from here as well: 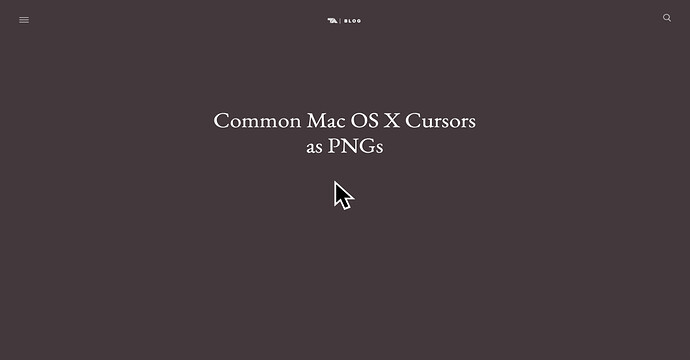 I've prepared the most common OS X cursors in a short list, if you want to include cursors in your mockups.

I searched in the web, but some things are easier to find than others…

39 large cursors each in pdf file format (but all are named… cursor.pdf !). Will fit for what I want to do.

Having fun with Monterey / M1 and Xojo…

I was fooling around and stored in the Clipboard a large image. I used that image as a MouseCursor and get a… 2100 x 2100 (around these values) cursor on screen !

I have accomplished this via declares (so it’s possible with plugins also). The code is available as part of the Ohanaware App Kit App Kit 2021 - Building Better Mac Applications

It was written for Aqua Swatch (FREE) which allows you to see all the available cursors on the Mac. ‎Aqua Swatch on the App Store

I was fooling around and stored in the Clipboard a large image. I used that image as a MouseCursor and get a… 2100 x 2100 cursor on screen!

Around 10 years ago, Mac cursors were still known to be limited in size (16x16, IIRC). It’s a big surprise to me to discover this limit is finally over (but I don’t know since when…).

Note: I do not tested if the size limit still exists in Icons for MenuItelm on macOS (there was none on Windows)…