Will not Run bc throws several errors. All I did was add in a WebDialogue and then add it to a project web page. 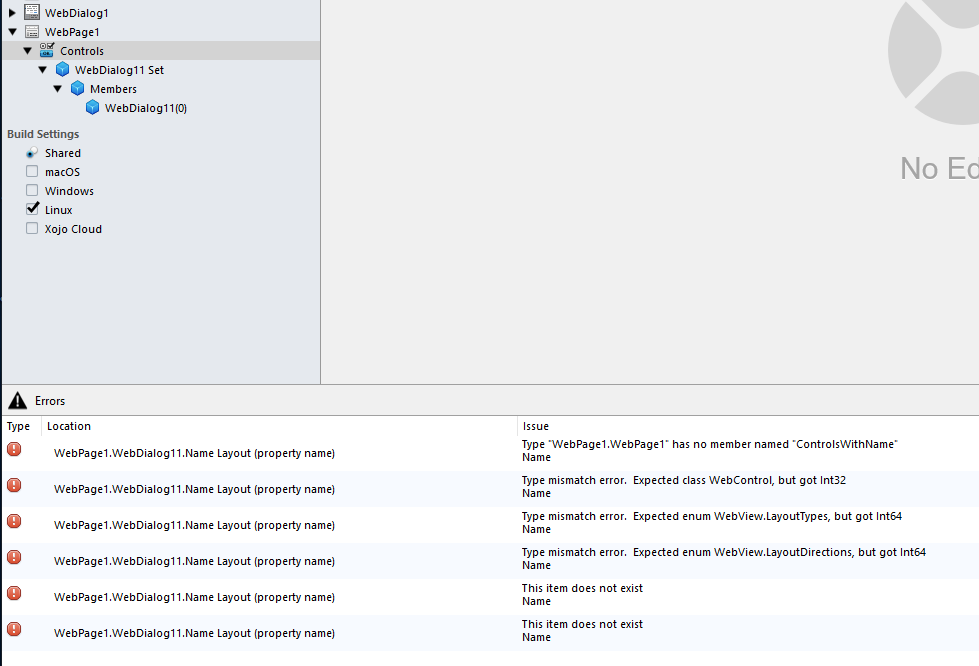 This worked very well in 2019r3 and I simply emptied out the old stuff aside from the WebDialogue from the 2019r3.2 project and dragged it into a new web page and this was the result.

I started FRESH from the controls directly in 2020r1 and the problem ended up being cured.

So my real question is… do we have to start from scratch with controls from the 2020rX series to ensure that these errors do not pop up?

do we have to start from scratch with controls from the 2020rX series to ensure that these errors do not pop up?

It looks like your original issue was that you had a ControlSet of WebDialog11, which is not yet supported in Web 2.0. As to your question, I recommend rebuilding but many others have converted with varying degrees of success.

That’s my recommendation as well. Similar to what I’m doing with some new os Updates. I usually just upgrade but after a few releases, I do install from scratch. That’s what I probably will do with Big Sur. Web 2.0 is for me such a big change, that I personally believe it will cause me less headaches to start from scratch and “migrate” things by copying code manually and creating the controls for instance from scratch.

“And too big to fail” projects will just continue to run on web 1.0 … customers are informed that bigger changes beyond the next 3 months will be costly and are not recommended as we have now a better solution in place. If they are willing to invest, we will migrate, if not … bad luck. I’m selling it as a major release from an OS. Most customers really do understand it. They are anyhow used to it. Changes in Bootstrap, Wordpress etc. are pretty much often causing a similar pain …

I figured this would be the case.
-_____-
At least there will be fewer mystery errors with a rebuild from the ground up.

I do need certain features that 2019r3 allows for so my rebuild will have to be on pause.

Thanks for the update re: ControlSet issue.

I will be needing several other features as well… looks like my reboot to 2 will have to wait.

I think that’s the right approach. I migrated one customer. That was a small project, but I still started from scratch. He is happy as Web. 2.0 is by far faster. But it is faster as well because I changed some routines.

With a sole copy & paste I would never have noticed this “bad” coding. And very often the UI is anyhow the biggest work. On top of that I have many Web 1 projects depending here and there on @Anthony_G_Cyphers 's great Graffitisuite components.

Hence as long as he’s not ready yet, it is obsolete for me to even start thinking of migrating these web apps ;-).

But it probably all depends on the type of app you are running. If you only have a few buttons and your app is mainly converting APIs into something new the user can download, then it will be easier. If you have a lot of UI stuff it is more complicated and more things will be missing.

My app is UI heavy so … [shrugs] … I will be waiting until API 2 has more of the UI and backend (read: UI method functions) that is available in API 1.