Bug because of "Scale" of size

I have several feedback cases for desktop that in my opinion are caused by “Scale” and the reviewers are (at least in one case) asking for a simpler case. My problem is XOJO will under certain unknown to me conditions fail, but in predictable ways. They also only happen when the volume of code gets too large. In most cases it is related to the number of windows in the code, and it has nothing to do with a certain call. I’m not sure what else I can do.
Here are some of the cases:
feedback://showreport?report_id=66854

for instance, on the last one, (title: “60469 - MessageBox needs a window to operate properly”), if I have too many I guess windows And I have code And it’s on Windows running in a module, it stalls the application. It takes many minutes for the MessageBox to appear. I created a MessageDialog to subvert this, but this still does happen today.

I only seem to have one clue - size and quantity of windows.

None of your example proyects even runs. One of them dont even have all the methods you are ussing, ven spending some time comenting out those calls, BOTH projecs end in a Nil Object exceptions. Xojo employees are not going to spend hours guessing what your code is trying to do and fixing it.

And even if they were compilig… your reports make no sense at all. In feedback://showreport?report_id=60469 you are complaining about the MsgBox and its documentation, BUT YOU ARE NOT EVEN USING A MSGBOX

your example has a custom window called BoxMssage WTF?

Ignoring all that, your examples:

That is the intended behavior, MsgBoxes are MODAL windows and as all modal windows (as saind in the documentation):

Displays the window and causes the current method to stop executing until the window closes or becomes invisible.

the reviewers are (at least in one case) asking for a simpler case.

They are asking for WORKING examples. 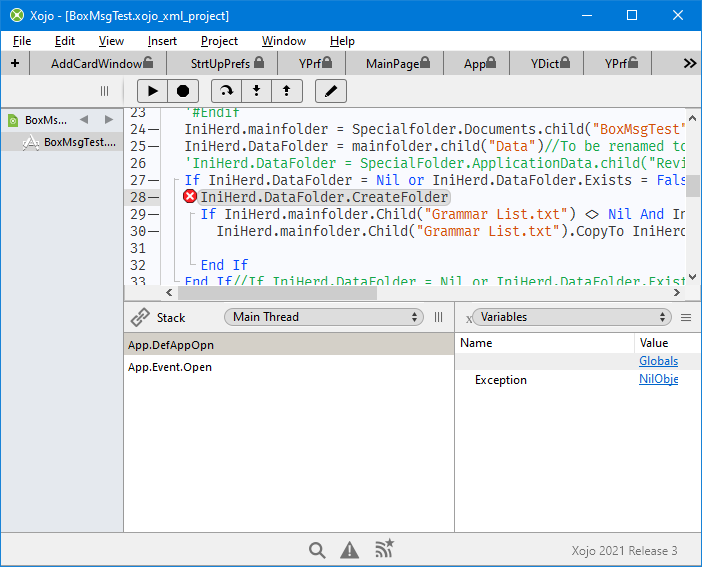 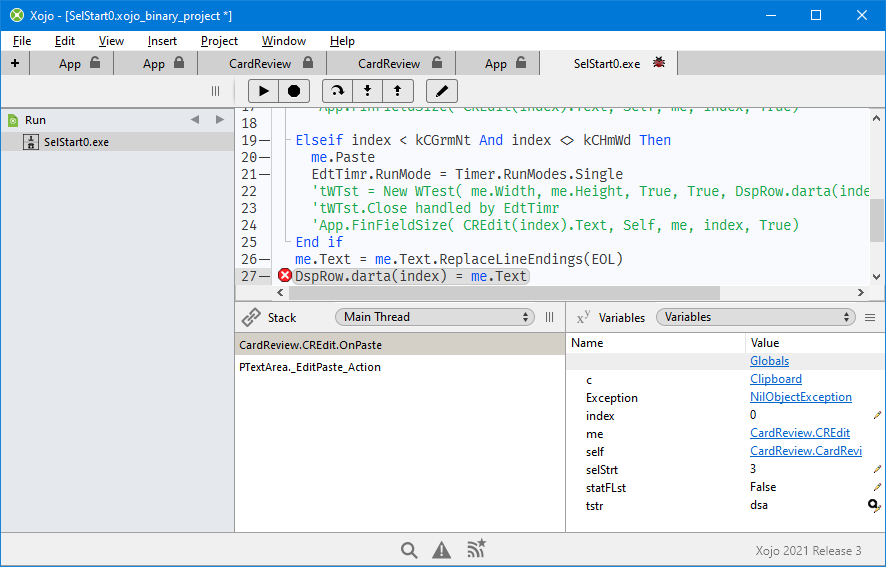 Both examples dont even run. Make sure you have WORKING examples and to provide steps to reproduce the problem so they can know what you are talking about.

Assuming in the future yo provide working examples, you are not even explaining WHERE it is happening, doing WHAT, a loose “happens on a module when a window opens another windows” it is the same problem, no one is going to spend hours looking for all the methods in modules and windows.

You must say:
Steps to reach the failing point(run proyect, click this, copy that, etc)
Steps to reproduce the problem (paste this, click that close those, etc)
Place where whe problem happens(app stucks in method X from module Y)

And do a Goggle on how to choose better variable names or really any names. For instance Ten tips to help you choose good names .