FYI just saw this article and thought that it may be helpful to the Xojo staff… I know adding Android support Xojo will be extra complicated because of the whole Java thing, but maybe the new Android C++ stuff will make things easier for the Xojo engineers???

The best news would be if Google was to ditch Java for the Android platform and embrace LLVM and Swift.
Oh, wait :
http://www.macrumors.com/2016/04/07/google-possibly-adopting-swift-for-android/

A few months ago, Xojo inc made it very clear that they never gonna support Android. I respected their decision and bought a B4A licence so we can also deliver Android apps in the future.

I regret also that the Windows side receives no love any more from Xojo inc. Everything is concentrated around Mac - IOS - Raspberry, because that are the majority of Xojo users.

You should look for other solutions if you want to develop for Android.

A few months ago, Xojo inc made it very clear that they never gonna support Android.

We did ?
I work here and don’t recall any such “clarification” having been made

Already more than 50% of computing devices used to browse the Internet are mobile, which over 80% are Android.

Today, kids start computing with smart phones and use the Internet on them first. They may never use a computer. For better or worse, Android is becoming the same kind of standard Windows used to be.

I would love to be able to generate Android apps in Xojo. I am not sure Xojo Inc. can forever subsist on the Apple market alone. I would be surprised if they entirely rejected the idea of having an Android product.

All that said, iOS had a long and painful hatching process (Over 2 years, was it ?). Still today it is far from complete, between too few controls and not enough properties on the small complement available. With some luck Xojo iOS could be on par with Desktop and Web for next Christmas, but that will be 4 years since the fateful XDC when Geoff showed the first demo.

If that is any indication, even if Xojo had already done some exploration on Android, that means shooting for the mid future. In computer years, half a century

When I see how difficult it is for yours truly to tend to the several products I have going, I can only imagine how Xojo engineers have to scramble to deliver on time their four releases a year, some of which are pretty heavy like 2016R1. Adding Android prematurely could be way too much, and we would have to suffer with current versions we rely on to put bread on the table.

So for the time being, B4A I will stay with, even if the IDE makes me think of Windows Paint in 3.2.

A few months ago, Xojo inc made it very clear that they never gonna support Android … You should look for other solutions if you want to develop for Android

Whether by actual words, or actions (or inactions), this is a fact. Nice dream to wish Xojo would support it, but a dream nonetheless.

Interesting statement… So are you saying that there’s a secret office in the Xojo HQ, in which you don’t even know what’s going on? lol… Is it labelled “Brown closet”, yet takes up half a floor?

Interesting statement… So are you saying that there’s a secret office in the Xojo HQ, in which you don’t even know what’s going on? lol… Is it labelled “Brown closet”, yet takes up half a floor?

And, if the room were truly secret I wouldn’t know about it to say anything about it … would I ?

Back in the eighties, the application king on PC was a Dos spreadsheet program called Lotus 1-2-3. People routinely called the Mac a toy, and had no words harsh enough about Windows. In the nineties, Excel took the world by storm, Windows became the standard PC interface, and Excel the universal spreadsheet reference.

Whether or not Xojo has an Android project, any developer should be conscious of the slide towards mobile, and prepare for the transition.

When Xojo will support Android, I will immediatelly drop B4A instead of Xojo.

On this moment, I am using Xojo 2015 r2.3 which exactly does what I want it to do. I am looking forward when the 64bit version comes out of beta stage and it is possible to debug again in the IDE.

I understand that bringing new things will take a lot of time. I do not blame Xojo for showing little love for Windows, it is only a feeling I have. I am a long term user and will continue Xojo far into the future.

There are lots of tools out there for the mobile market.

At the moment, I’m happy Blackberry is moving to Android.

We use Xojo and a bunch of other tools but we will be happy if Xojo supports Android one day because it becomes more and more powerful each day.

When Xojo will support Android, I will immediatelly drop B4A instead of Xojo.

Good luck with that. If Xojo Android has the same lack of features as the current iOS one, it’s going to be useless. I prefered Xojo stayed focused on what they have. Still lots of work in that departement. And as some Xojo employees have expressed their lack of love/interest for the Android platform on some occasions on this forum, I wouldn’t expect a state-of-the-art feature set. Mobile development heavily relies on all the goodies a mobile device can provide (like sensors, camera, location,…). If this is not (native) supported, you can as well create a WebApp.

Mobile development heavily relies on all the goodies a mobile device can provide (like sensors, camera, location,…). If this is not (native) supported, you can as well create a WebApp.

Unfortunately for iOS users Safari is years behind the curve: 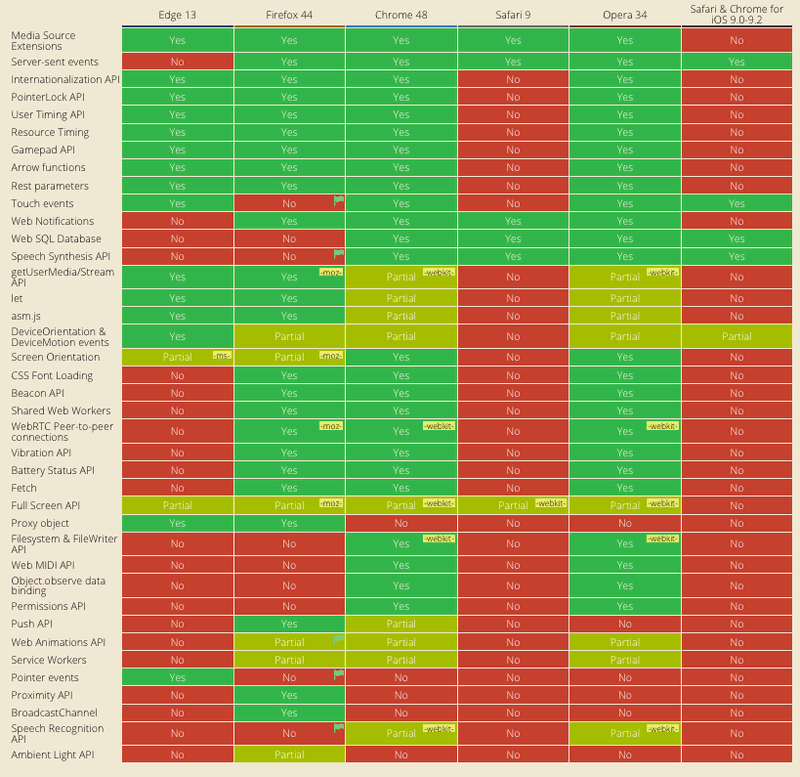 Indeed. I’m experimenting myself with some of them for my ABMaterial lib. But as you say, you cannot rely enough on the support for it for each browser yet.

Nice to see such an overview though, thanks for that!

Unfortunately for iOS users Safari is years behind the curve:

Why would Safari support it? That’s what native apps are for. Unless you want to run everything in the browser, in effect make the browser the new desktop and turn MacOS into Chrome.

If you’re targeting businesses then this discussion will have less importance in the near future.

I’m only creating apps for business purposes. Especially when tablet apps are needed then it’s quite safe to assume they are using an iPad.

Imho Xojo iOS is usable for business apps despite its “limited” collection of controls and classes. For me it’s not a dramatic thing.

NB: Yes, I have complained a bit on the lack of progress, but that sentiment is with regard to progress vs. yearly update fee.