But, 2019R1 also has a bad bug that causes HTTPSockets and URLConnections to be very slow and use lots of CPU - see feedback://showreport?report_id=55301 . This bug is noted as being fixed for release in 2019R2. There’s a workaround in the feedback case but it seems to barely work in my testing (speeds are still 1/5 or lower of what they should be).

Yes, that’s true - a really showstopper for us - we are still on 2018R3 because of this bug

Here’s a summary of my testing so far:

2019R1 on mac : seems to work fine, and with the thread workaround in feedback://showreport?report_id=55301 I’m getting what appears to be nearly 100% speed.

Update: in 2019R1 on Windows, it turns out I was actually not doing the workaround as suggested here feedback://showreport?report_id=55301 : the workaround is to call .SendSync() inside a new thread, rather than .Send() on the main thread.

After making that change, it is faster (instead of 1% speed, I’m now seeing 10% speed) but still, a 90% slowdown is problematic.

However, it’s possible using the HTTP Range: header to download a byte range of a file, so another workaround is to use N downloaders to download the file in parallel, then re-assemble the pieces when done. I’m working on a sample class, and if I can get it to work I’ll add it to the bug report.

Yea, URLConnection in 2018R4 was a bad joke, where was the QA? But, after all the bug fixes in 2019r1 and since my app already had a .SendSync() inside a thread, URLConnection is working OK and fast wought for API calls. Are you using it for actuall file transfers?

Here’s a demo of a multi-socket downloader - it downloads a file using 1 to 10 separate URLConnections, and seems to be a pretty good workaround for the bug in 2019R1 for the time being.

Untested, needs error chekcing, use at your own risk, etc. etc:

The workaround of William is making things better but we still have a speed loss of about 50 %.
We’d love to use 2019R1 (and really hope for a point release to fix this bug) but unfortunately with this bug we’re stuck at 2018r3.

@Michael Diehr:
Good approach but only working with files?
I’m getting a RuntimeException: 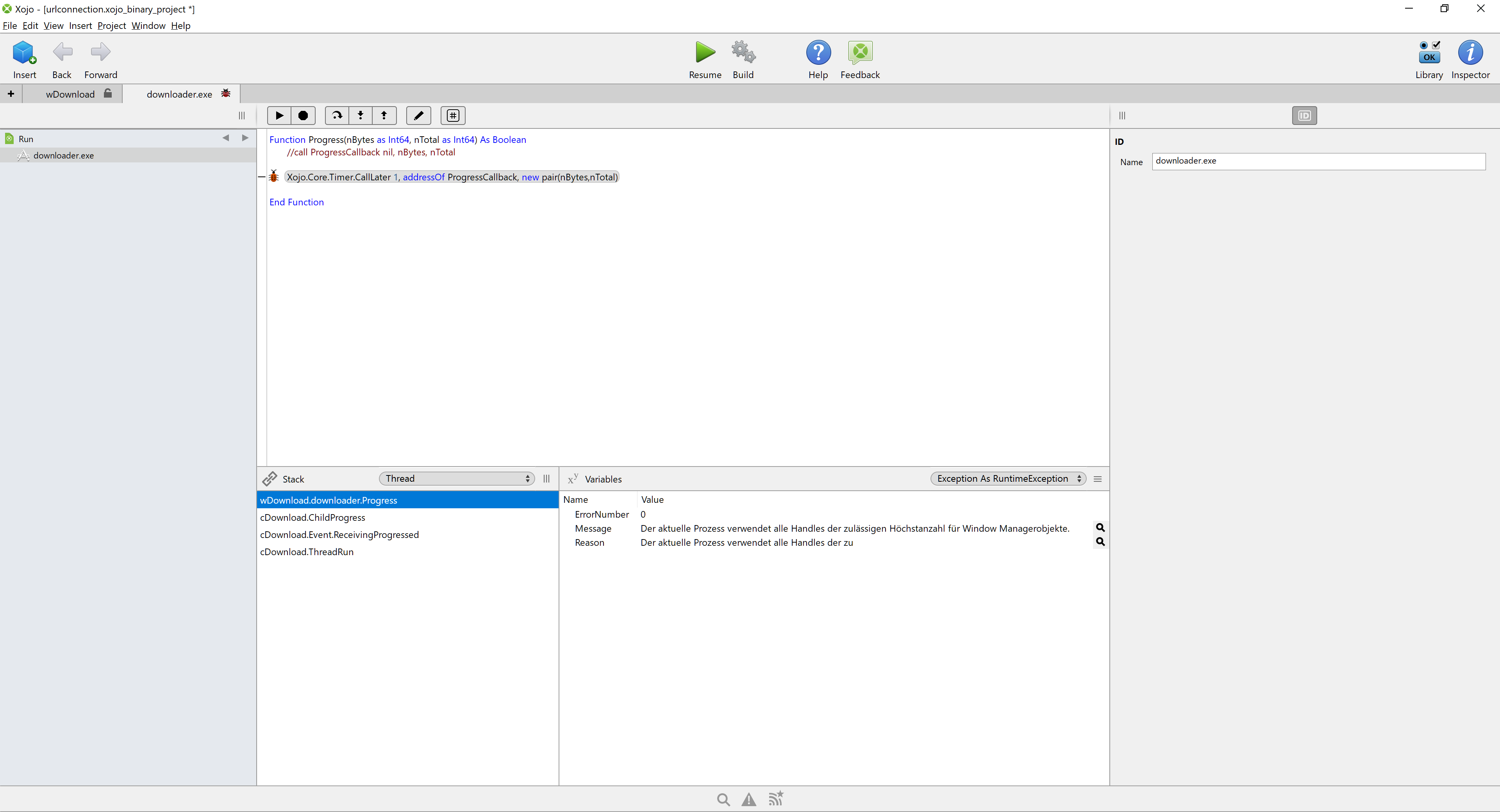 First, there seems to be no problem on Mac.

My german is a little rusty, but with help from Der Google, I get this

This is interesting: in my production app, I’m actually not using Xojo.Core.Timer, but Classic Timers.

So it seems like we’ve uncovered a second, unrelated bug with Xojo.Core.Timers.

Here’s version 2 which only uses a single timer set to mode 2 (Multiple) rather than constantly resetting the timer to mode 1:

the bug with timers has been submitted as feedback://showreport?report_id=55529

The bug seems to be that using Xojo.Core.Timer.CallLater or setting a classic Timer’s period within a thread is leaking resource handles. The workaround is to use a classic timer with mode=Multiple and create it outside the thread.